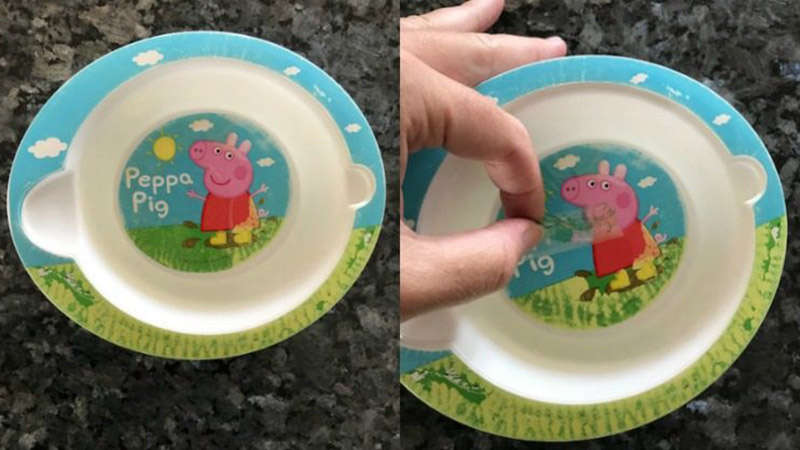 Nicola tells Babyology that she was feeding her daughter Olivia in her highchair when things started to go wrong.

Initially the mum was confused and assumed her young daughter had a bit of food stuck in her throat. She took her out of her highchair and tried to clear her airways but couldn’t find any lodged food, then she did what most parents would do and slapped her on the back a few times.

Nothing happened, but not knowing what else to do, Nicola just kept trying to knock out whatever was lodged in Olivia’s throat.

“I flipped her over but she was still red, so I did it again. It was then I noticed that around her mouth she was starting to turn blue,” says the mum, who was alone with her daughter at home.

“I wasn’t sure whether to keep going or call an ambulance. Normally when your child is choking you get whatever it is out and then they’re fine, but I couldn’t find anything and she was still struggling. It was terrifying.”

After what Nicola recalls was the longest minute of her life, she reached into her daughter’s mouth and felt something. Luckily it forced Olivia to gag and vomit, and at that point she noticed amidst all the veggies and little pieces of meat there was a bit of plastic.

“I then looked at the bowl and saw the film along the bottom of the bowl had lifted and that’s what she had ingested. I’m really fortunate that I didn’t need to call an ambulance and could clear the obstruction without harming her, however it could have been so much worse,” says Nicola.

“Some people know CPR but when it comes to the crunch many parents won’t know what to do. It’s terrifying. So I really want all other parents to be aware of this product’s choking risk.”

Nicola’s story is frightening, however even more concerning is that it’s not an isolated incident. Late last year overseas manufacturer Playtex recalled 5.5 million similar children’s bowls and plates in the US and Canada due to a choking risk caused by the clear plastic coating that can peel or bubble away from the surface of the products. Four reports of choking were recorded (although no serious injuries were sustained); a further 11 cases reported plastic being found in each child’s mouth; and there were also a whopping 372 reports of peeling or raised plastic.

Nicola purchased the popular product from her local Big W store 12 months ago and while the manufacturer of the Peppa Pig bowl and spoon set is unknown, this particular design and many like it are available from numerous retailers. Based on similar reports from overseas it appears that the choking risk is not reserved to just this one-character design, but could potentially be any of these particular types of plastic children’s bowls.

Worryingly, the $5.00 bowl and spoon set is promoted on Big W’s website as being “perfect for little ones learning how to eat on their own.” If Nicola had not been paying close attention to her daughter who knows what could have happened.

“I know so many other mums and they all have these types of bowls with their kids’ favourite characters on them – that’s why you buy them in the first place,” says Nicola. “You don’t use porcelain bowls because you’re worried they’ll break, so you get these fun plastic ones thinking they’re safe.”

The recent choking incident has been a big shock to the Gold Coast mum, particularly because she prides herself on being a very cautious parent.

“I cut up my kids’ grapes. I also have a four-year-old son who leaves little things like Lego lying around and am constantly hovering over my daughter to make sure she doesn’t choke, but when you put them in their highchair you think they’re contained and somewhat safe. You don’t think they’re going to ingest a bit of plastic,” says the emotional mum.

Nicola also says she has never put this bowl in the microwave, although the product is actually deemed safe for both microwave and dishwasher use, according to Big W’s site.

In light of the serious nature of this event, Babyology also contacted Big W for a statement about the product. They stated they began investigations into the incident shortly after Nicola reached out to them on Friday, promptly contacting the supplier who manufactures the Peppa Pig bowl.

“As safety is Big W’s highest priority, we can confirm that the bowl is tested and meets Australian and New Zealand safety standards,” said a spokesperson for the retailer.

“We are continuing to work together with the supplier and the customer to resolve this incident and ensure that the necessary steps are taken to prevent any future issues,” they added.

At this stage it’s unknown exactly what caused the plastic film to lift from little Olivia’s bowl and whether a product recall will be issued in the near future. In the meantime, we’re recommending all parents who own this bowl or ones like it to inspect the plastic coating closely, and to exercise caution while using it until further notice.

If you suspect your child is choking and are unsure how to perform CPR, call 000 immediately.