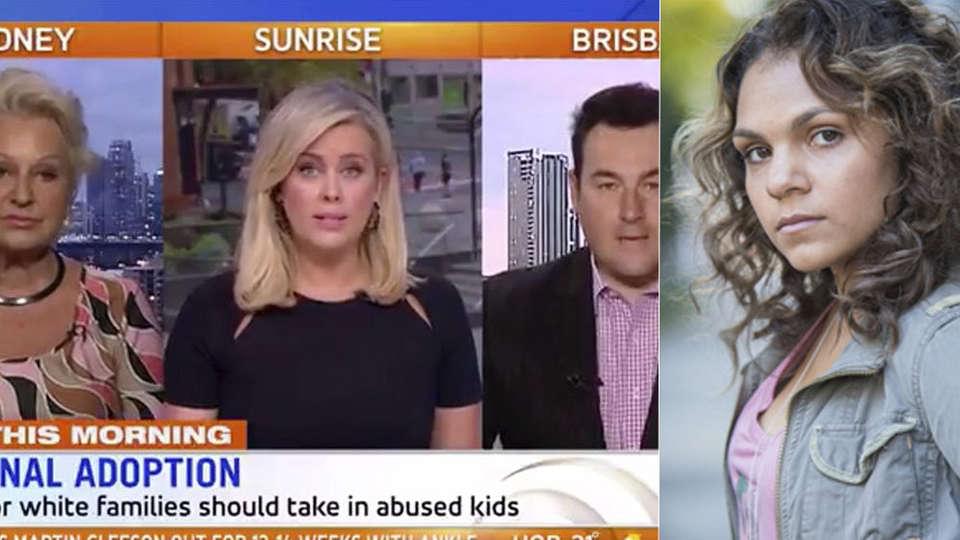 This week Assistant Minister for Children and Families Minister David Gillespie said that Indigenous children in the foster care system should be able to be placed with non-indigenous families. Currently there are kinship laws that mean authorities try to keep abused or neglected children within their family or community.

"There's a fear that we would create another stolen generation but I'm not advocating that," Minister Gillespie said.

Following on from this, Channel 7’s morning program Sunrise hosted a panel discussion with two non-indigenous Australians about why this would be a good idea.

Rarriwuy Hick is a Yolngu woman, an actor (you might know her from the ABC series Cleverman) and someone who has actual lived experience with this issue – she and her father are carers for her two nephews. She started #ourkidsbelongwithfamily, a social media campaign raising awareness for the importance of family and connection for the Indigenous community.

Rarriwuy says that this sort of stereotype perpetuated on Sunrise and by Minister Gillespie has been extremely hurtful over the years.

“I have been deeply hurt by this,” Rarriwuy says. “What was said was [that] white famil[ies] should be allowed to adopt abused Aboriginal children to save them from rape assault and neglect. Now I am Aboriginal and I'm a carer. I'm looking after two of my nephews and I can't help but take that personally because we work so hard to make sure to ensure that the children are safe and happy and are in a very healthy environment.”

“It's really concerning that people you know like guys on the panel on Sunrise can just say things so openly and blatantly be racist without even having any education or awareness of what is really going on and the depth of how damaging what they were saying, how damaging that can be to many people.”

When Rarriwuy’s two nephews were taken from their immediate family, their extended family - who had a good bond with the boys - weren’t informed straight away. This disregards the placement guidelines that welfare and the government have put in place for their organisations called the Aboriginal and Torres Strait Islander Child Placement Principle.

“This is coming from a place of control, and you know a next generation of the stolen generation,” Rarriwuy believes.

On Sunrise,Seven’s former employee, Ben Davis agreed with Minister Gillespie’s comments; “Good on David Gillespie for standing up and saying what a lot of politicians are afraid to say because of the fear of being labelled ‘racist’. I mean, it’s political correct nonsense, it’s gotta go.”

Rarriwuy says that it’s not at all appropriate to dismiss racism.

“You've got to be really careful what you say. You're talking about people's livelihoods here. When children are taken away from their family, from their culture and their traditions … that's why mental health issues come into play. You know, Aboriginal people have the highest rate of suicide in the world not just in Australia but in the world. That's concerning and we're not a large percentage of people in Australia or in the world.”

Listen to Rarriwuy on Kinderling Conversation:

She continues; “What has happened in the past, we've been ripped away and forcibly removed from our families …  I know a lot of families, mothers who feel sad if their child is just going to have a sleepover at their friend's house for the weekend or something as simple as that.”

“Imagine what it's like being completely removed. And what is concerning about what was said the other day on Sunrise is that they used the word 'permanent care'. So they are wanting to take Aboriginal children away. Take them away from their family permanently, ‘til they're 18. Everyone's saying it's PC gone mad, but these are people's lives here that we're talking about. And it's been thrown around without any care at all.”

“While the boys were with a foster family, they were non-indigenous and we had no idea where they were or who these people were in the beginning. We had to work really hard to find out how [the boys] were going.” Rarriwuy says. “English is our sixth speaking language … so they're pretty intelligent kids and I've always been proud of who they are where they come from. But while they were at this foster home … they began to tell me not to speak to them in language. That English is the correct language to speak. They didn't want to be called by their original names, and so this is why I'd like to call it cultural genocide. It's people coming in who have no awareness or understanding of where these kids come from and how important it is to know where they are from and their culture and traditions and being told that they are not allowed to speak their language.”

Now that her nephews are living with Rarriwuy and her father, she says they’re so happy.

“The six-year-old has a speech tomorrow, which he wants to do all in language.” She says. “I’m so proud of him and proud of both of them and how far they've come and they've said to us a few times … I'm so happy that I'm with my family.”

“We need as many non-Indigenous people, not speaking for us, but as our allies to come with us and stand with us. Spread the word, spread the awareness and just start reading as much information as you possibly can about it,” Rarriwuy adds.