Dad desperate for answers after toddler locks iPad for 47 YEARS 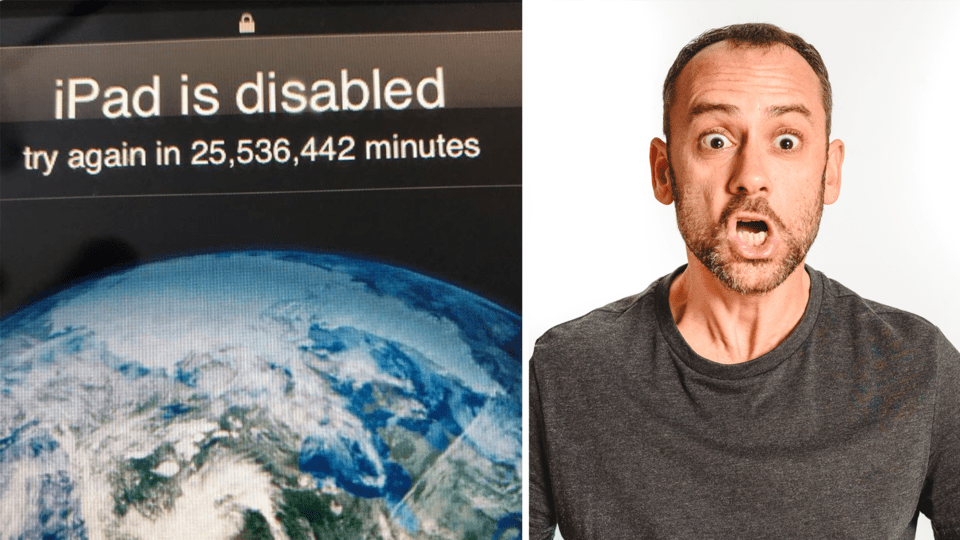 Sure, we've all been locked out of our electronic devices at the hands of our toddlers. But never for 25 million minutes!

What do you do when your child locks you out of your iPad after entering the wrong password countless times?

If you – like many other parents – sometimes hand your iPad over to your child in the hopes of a few minutes peace, this story serves as a cautionary tale.

On the weekend, New Yorker journo Evan Osnos revealed that an iPad in the hands of his preschool-aged child had quickly been transformed into a half-century-long nightmare.

It seems that Evan’s son had got his hands on the device and repeatedly had a go at cracking the password. Apple being Apple, the iPad was speedily disabled in an effort to protect the contents from a hostile hack.

Evan shared a photo of his disabled iPad screen promising this was the real deal. On the screen was a message advising the user to try entering a password again … in 25, 536,442 minutes. That’s around 47 years, in case you were trying to do the sums. 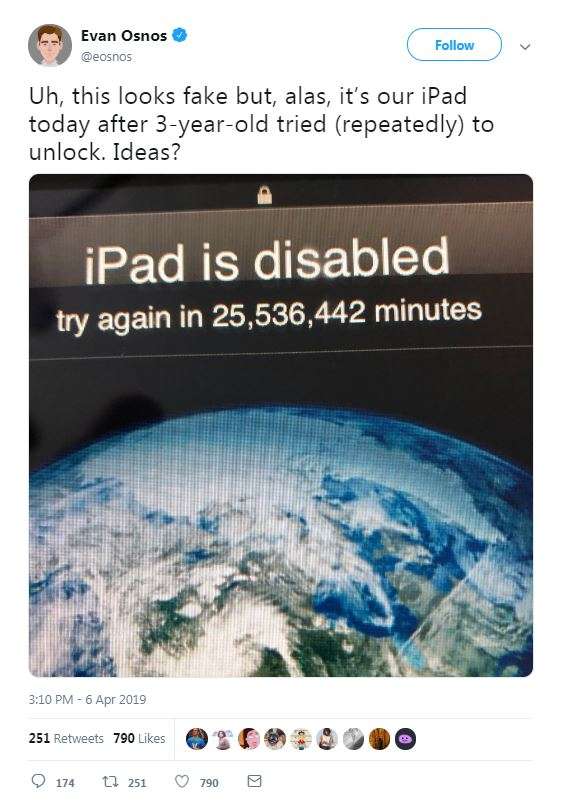 If you think this sounds familiar it’s because a similar story was doing the rounds last year. Again, a small child’s busy fingers had resulted in an iPad being disabled and again it was for 25 million odd minutes.

So if there’s one thing we’ve learned about this sort of dilemma – apart from giving your kid access to your device passcode – it’s that it seems that 25 million minutes is where disabling often maxes out! Good to know that 47 years is close to the tip-top time you’ll have to wait to play Candy Crush again, right?!

A quick scout on Google reveals that this problem is a very common one (as I bet you already knew, dear reader!) and that parents have been googling fixes like crazy.

Also? The lock period mentioned is very often 47 or 48 years. i.e. around 25 million minutes. In fact we couldn’t find any stories about iPads being locked for more than 48 years. #SmallMercies

So did people who read Evan’s post have ideas on how to get his iPad back online? Why yes they did. Not only that, they had experienced similar and deeply empathised with this dad and his goner of an iPad.

“Time travel seems to be your best bet,” one Twitter user advised.

“Just wait the 48 years,” someone else suggested.

“Reboot your three-year-old,” another commenter posted.

“I always buy a new iPad when this happens to me,” someone wrote.

Another expert decided that Evan would “never be able to use [the device] again” which seems rather dark.

Luckily many others had a less pessimistic and much more helpful response, linking to various guides to restoring locked iPads and hoping that Evan had backed up his device.

“Put it in a bag of rice!” still another smartypants quipped, pointing out everyone’s favourite Apple device fix.

And if you found your way here because your child has done similar? Please accept our deepest sympathies and this advice from Apple on what to do next.