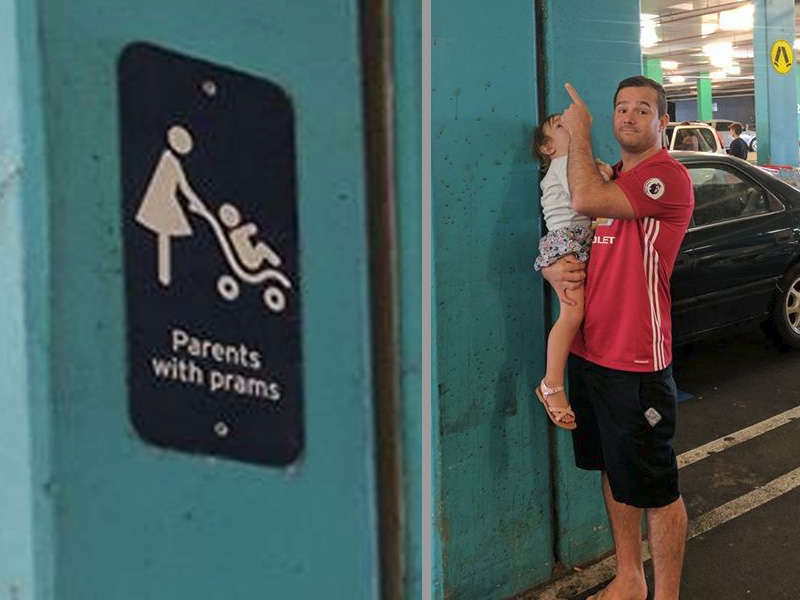 On Sunday, Jamie Simpson from Rockhampton posted a photo of himself next to a female parent pram sign in a shopping centre with the tongue-in-cheek caption:

“Dad's of Australia let's band together and get these signs changed !!! Men can shop with their children too !!! #menism Share it around and show the dad's of this world some love !!”

The post has since been shared over 32,000 times at the time of writing and amassed over 4000 comments. It comes a week after Melbourne’s announced it's trialling female pedestrian signs in the CBD in a move to counter “unconscious bias” (read about it on ABC news).

As you'd expect of the internet, Jamie's post has generated a wild range of opinions - from the supportive to the negative to the offensive.

Some men and women agree it’d genuinely be a great idea to have a male sign instead to be more inclusive. Some are claiming mock outrage and sexism, while others think it’s political correctness gone mad, and / or just a waste of time in the face of bigger issues.

“What an outrage. Men go to the shops with their babies too! I can’t believe the government hasn't fixed this,” writes user Chris.

“I'm more concerned about there being no safety rails on the pram for the baby,” adds Ash.

Then it just gets ridiculous. “How dare they assume all parents have legs. This is a sick outrage for all of our loving amputee parents,” writes another user, Tim.

Of course, the most sensible solution is one we've already seen in some shopping centres – unisex signs.

:: Clementine Ford on raising kids in a sexist world
:: Clementine Ford discusses feminism and motherhood
:: Bouncing back: How to boost your kids’ resilience
:: How I manage my anxiety as a working mum
:: Learning to love your body after having kids