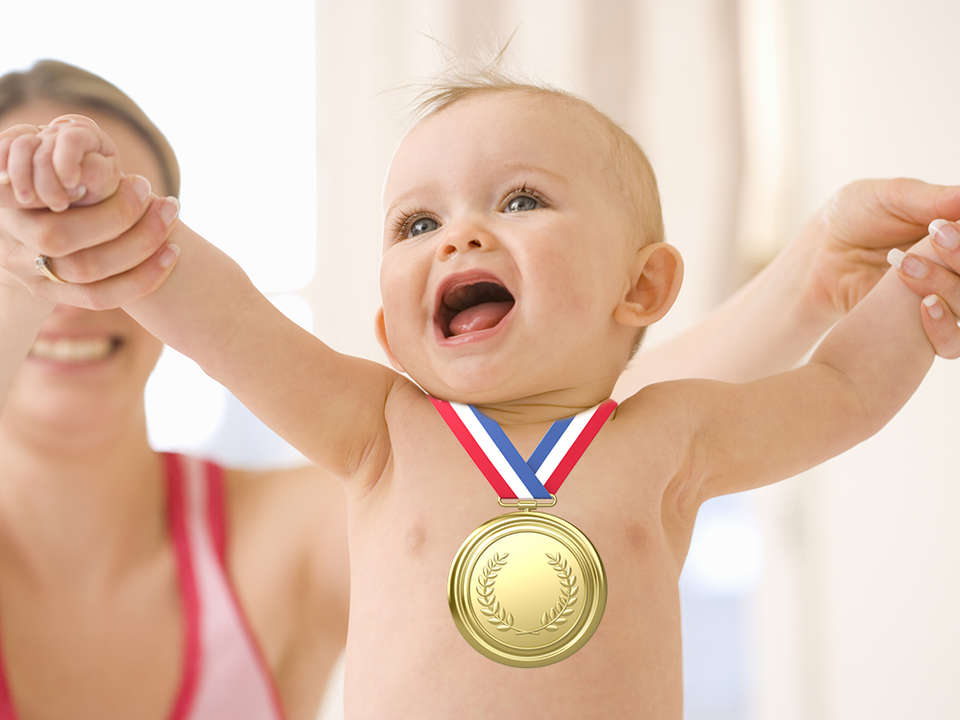 It’s the ultimate test of strength and endurance, sweat and sacrifice. Pushing your body to the limit to be the best you can be. It’s early mornings and late nights, christened in blood, sweat and tears.

Of course, we’re talking about parenting. Exhilarating as it is exhausting in its pursuit of excellence, it’s a lot like the Olympics ...

Which got us thinking – what if parenting was an Olympic sport? What family feats deserve to be celebrated in the greatest arena of all? Because after all, doesn’t every parent deserve a gold medal?

Without further ado, we present the Parental Pentathlon! Ten per cent determination, thirty per cent perspiration and sixty per cent sleep-deprivation, it’s the true test of child-raising champs. Introducing the five events:

Passing a baton at high speed? That’s a cinch compared to pulling a poo-packed nappy off a writhing baby multiple times a night. Survive a storm of cries, wet wipes and human waste before baby fully wakes up, and then tag your partner so you can get twenty minutes of fractured sleep before doing it all again. Is that wee on your hands or just your tears? Probably both!

How it works: The first pair to get through the night without getting poo on the walls takes home the trophy.

The 100-metre sprint is a stroll in the park compared to this frantic foot-race. Forget the firing pistol, this event starts when your child suddenly grabs their genitals and screams ‘TOILEEEEEEET!’ with a heart-stopping shriek. Realising there’s none in sight, terrified parents must quickly bolt in random directions to find a spare bathroom / tree / sink in time. Just pray it ain’t number twos.

How the event works: First one to find an unlocked loo wins. Any parent defecated on is automatically disqualified.

Sure, battling a beefy bloke in a leotard sounds scary, but it’s nothing compared to wrestling the all-powerful Portacot, which has reduced even the strongest parents to tears. Especially at the end of the night at a friend’s party when you’ve had a few special lemonades and your baby brain has already tapped out.

How it works: the first parent to get the Port-A-Cot in a chokehold and into its original bag takes top honours.

Lifting weights? Easy as. Lowering a sleeping baby into a cot without waking them? Near-impossible! Parents can train all they like – rocking bub 5000 times, singing ‘Twinkle Twinkle Little Star’ on loop – and employ performance-enhancing devices – night lights, white noise – but it all comes down to those crucial seconds when baby’s head hits the bed and you need to figure out what the hell to do with your arm pinned underneath their neck.

How it works: The first weight-lowerer to get their kid down still snoozing takes the cake, but only if they survive the terrifying task of leaving the room without making a sound.

The Olympic steeplechase ain’t got nothing on this obstacle course many of us run each morning. In 20 manic minutes, parents must wake up, take one sip of coffee, make the kids toast, dress them in semi-clean clothes, look everywhere for the right shoes (no, not those ones, the sparkly ones!), re-make toast (triangles, not squares), change your top because they wiped vegemite on you and it looks likes poo, and pile them into the car without too many tantrums or tears.

How it works: Get to daycare in one piece without losing a kid and you get the gold.

Which one do you think you'd score parenting GOLD in?