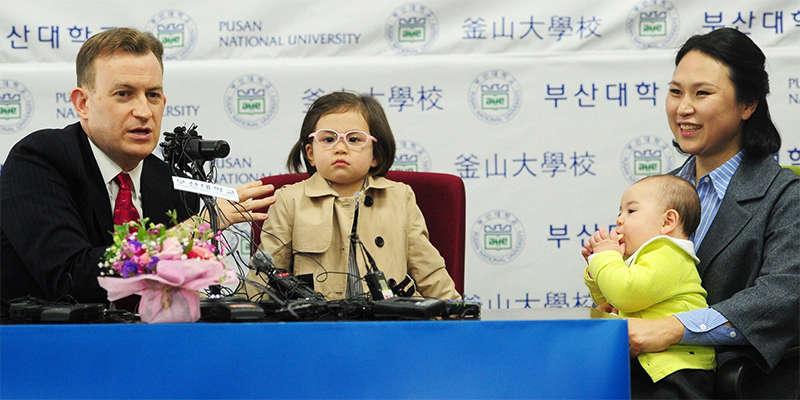 It’s the story that keeps on giving. Fresh from doing their first TV interview since their hilarious video-bomb went viral, the Kelly family – Robert, Jung-A Kim and their two kids Marion and James – conducted a press conference in their hometown of Busan to discuss their crazy rise to fame.

Watch the hilarious clip that charmed the world:

While her parents addressed the assembled media (read their full statement), it was Marion, aged 4, that captured the internet’s attention (again) with her style – cool trenchcoat, glasses, sideways pony-tail and lollipop – and her thoroughly non-plussed expression.

Seriously, she looks like she does global press conferences every week like a boss and without a care. Needless to say, she now has even more fans around the world!

This is the kid who interrupted her Dad's BBC interview. She is my queen today and forever. #hero #boss #style #ootd

when you’re a tough, no-nonsense detective who’s had it with those pen-pushers at city hall pic.twitter.com/ihjr6AfgnV

If she isn't President of Earth by the time I'm 80, I'll be bitterly disappointed. pic.twitter.com/f5qEfaaPT7

I love everything about Marion who interrupted her dad's BBC interview. Love her trench coat and I love her glasses. pic.twitter.com/U3KLF1LIvF

BBC interview kid has just been cast as Commissioner Gordon in the new Batman movie. pic.twitter.com/mM2aYgMOGM

Check out our BBC Dad remix!