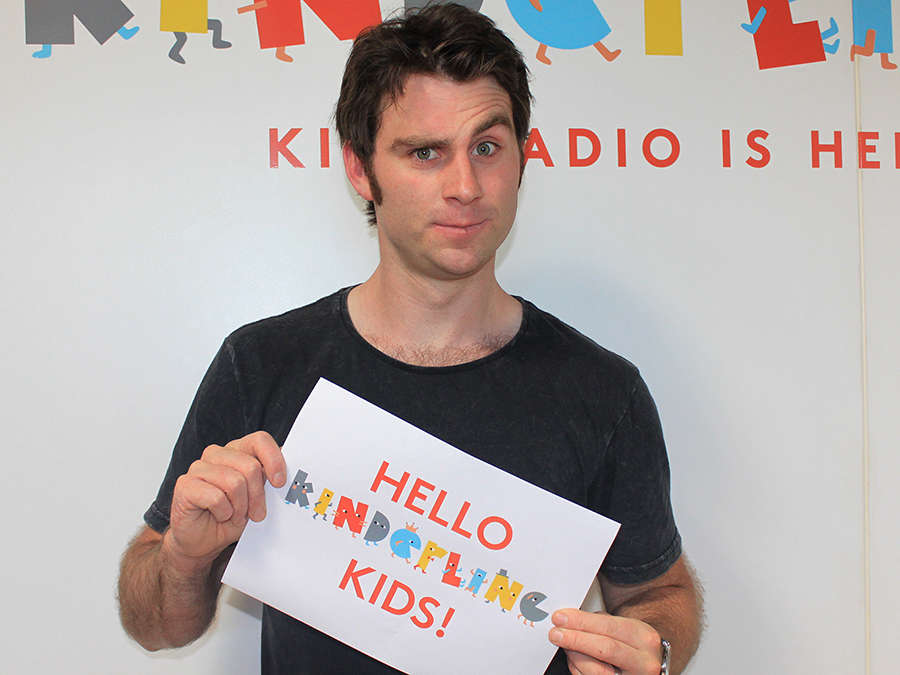 Before embarking on his new tour for his latest Christmas Party album, Jimmy 'Giggle' Rees recently dropped into Kinderling Conversation to discuss everything from partying puppets to being a new parent. Here's six things we took away from the happiest man we know.

Turns out our favourite owl gets up to a bit of mischief when the cameras stop. Let’s just say he doesn’t just go out for the Night Watch if you know what we mean. Who knows maybe one day Hoot will get his own show aimed at a more mature audience?

Says Jimmy: “(Between takes) the puppeteer will often do these funny things with Hoot, like pretends he’s had a big night. Coming from this blue, fluffy owl that’s all sweet and lovely and just doing something so adult is so funny and everyone’s wetting themselves laughing. The best thing (about the show) is just the spontaneity on set.”

2. He’s as hyper-happy in real life as he is on the show

Yep, Jimmy Rees in real life  is just as high-energy and hilarious as the helium-voiced Jimmy Giggle on the show.

“I’m the same person at home that I am on the TV,” he tells us. “I can’t take many things seriously. I went to uni and did a drama course but I couldn’t take it seriously. We’d come to our final end-of-semester exams and everyone would do these big, researched performances and I was just the dude that was imitating Jim Carrey.”

“We don’t have a studio audience on the set so I’ve got to make the 60-year-old-plus ABC crew laugh. If I can make them laugh, I can make everyone laugh. We’re just entertaining ourselves really.”

3. It took a while to adjust to working with a puppet

We hate to break it to you but Hoot isn’t real - we know ... we’re disappointed too. As Jimmy tells it, it took him quite some time to adjust to acting alongside his puppet partner. Now though, they’re quite the dynamic duo.

“Early on the show, I couldn’t help but look at the puppeteer. It was like “CUT! Jimmy, you looked at him again!” and I’d be like “Whoops! My bad.” But once you believe in the puppet, because he’s got so much character and the the guy that does him is so amazing at putting that life into him, you don’t notice the puppeteer at all.”

4. When it came to album guests, he called his friends

“I’d met Justine a whole bunch of times around the ABC studios and she said she’d absolutely do a song. We sang a song called ‘Zat You, Santa Claus?’, which is not that well known carol but it’s a lot of fun. It’s like Santa creeping around the house and leaving presents and we’re a bit scared. My manager actually manages Tina Arena, which was really helpful. We’ve met a few times at different gigs and she’s absolute superstar and she’s now on Jimmy Giggle’s Christmas Party (laughs). We got Lah Lah’s Big Live B and Fifi Box claims she can’t sing, but she did an awesome job. It was really cool.”

5. He travels from Melbourne to Sydney to record Giggle & Hoot

After a few stints living in Sydney where the show’s filmed, Jimmy moved back to Victoria’s Mornington Penisula earlier this year when his partner Tori fell pregnant with son, Lenny. If only he could fly like his co-star, the commute to Sydney wouldn’t be so bad.

“We just thought it was wise for our first child to settle back down there and I’d resume flying up and down every week. It’s a bit harder [commuting] with Lenny, but my mum and dad are just down the road. It’s a nice feeling that the support’s there when I’m away to know.”

6. His son Lenny is his biggest fan, even if Jimmy doesn’t believe it

Master Giggle loves seeing daddy on TV. Or maybe he really loves seeing Hoot - it may be too early to tell. Either way, it still blows Jimmy’s mind to see the effect of his show first-hand.

“I’ve always found parents comments about the show interesting and half of the time, I didn’t believe them because they’d be like ‘(my child is) six months old and whenever the music comes on, he turns his head and watches the show’. I was like ‘really?’ but now Lenny does that too. When the theme comes on, he looks straight at the TV and watches Giggle & Hoot… I think it’s the colour and movement and songs.”