This Year 2 maths problem has the internet baffled 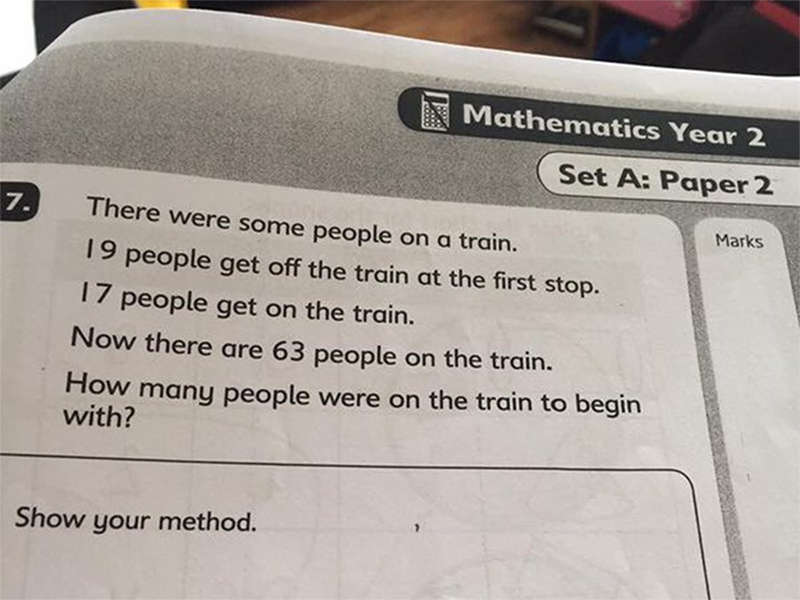 Can you do this Year 2 maths problem? Because we're struggling! (we'd like to blame our sleep-deprived brain but that'd just be an excuse.)

Luckily, we're not alone. After being posted on Twitter by Louise Bloxham, a mum in Bristol, UK, the practice exam question for six-year-olds has baffled an internet of adults trying to solve it. Primarily because Louise also tweeted:

Many Twitter users have argued 65 has to be right, but Louise maintains that "on a teacher's Facebook group a teacher said it was on the mark scheme as being 46." She adds that she'd been told the line '19 people get off the train at the first stop' is a red herring.

46?! What the hell. Some frustrated tweeters have argued the problem is poorly worded or just downright misleading, while other bright sparks have taken the question super-literally and say there's actually  zero people on the train to begin with (before the driver got on).

It's a brain-buster for sure, but whatever the answer (which is yet to be confirmed by the test company), we don't know how a poor Year 2 student could solve it. Which is the reason Louise says she posted it in the first place, as a protest against testing in primary schools in the UK.

Also check out these stories: