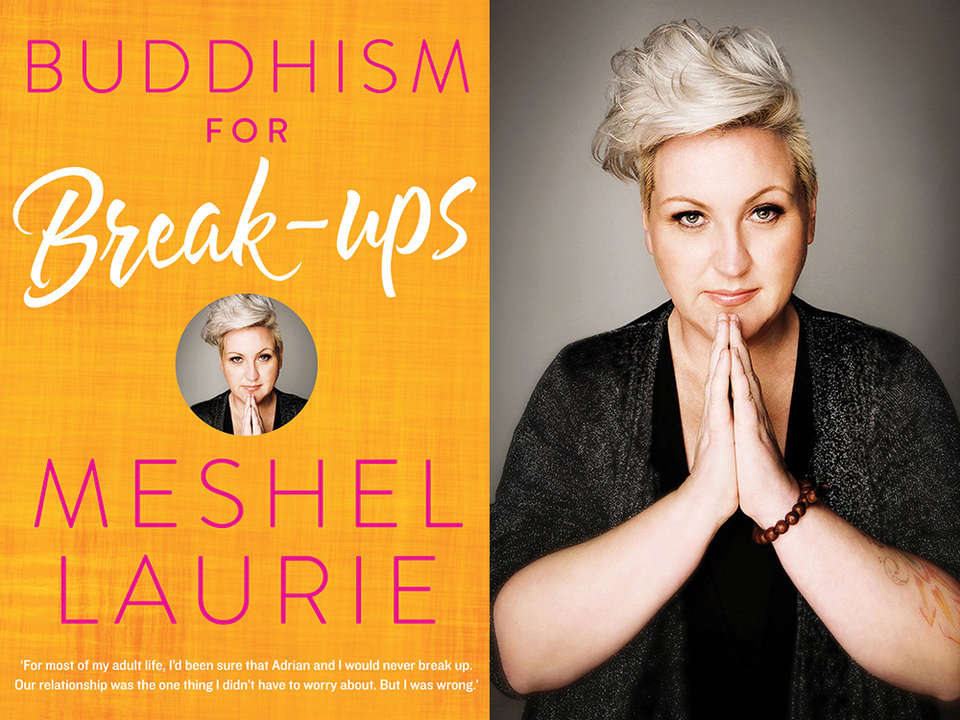 Meshel Laurie is probably best known as a comedian, KIIS FM Melbourne radio host and panelist on Channel 10’s The Project. You may not be aware that she’s also a Buddhist.

Her latest book is called Buddhism for Breakups. I was a bit reluctant to read it. After all, I’m not going through a break up, nor do I want to break up with my husband. But relationships after children can be challenging. Would reading this book make me see my marriage in a darker light?

I was pleasantly surprised. Meshel has a light touch when it comes to explaining how Buddhism helped her get through her divorce. And in the process she offers up plenty of practical examples of how we can actually make our relationships better.

While that wasn’t Meshel’s aim in writing the book, she’s found a few people have the same response as me.

“Buddhism has a lot of positives when it comes to just relating to other people, whether they’re our children, our co-workers, our parents or our partners,” she says.

One approach I found helpful was the concept of impermanence and emptiness. That is, that everything is constantly changing (including people) and we should approach our relationships as if they are new.

“If we can approach our partners every day accepting that they might react differently to the way we want them to, to the way we’re used to them reacting… they may have a different set of goals to the goals that they brought to the relationship.  If we can learn to roll with that and appreciate that, and embrace that and not fight it, that helps relationships a lot.”

This makes perfect sense to me. I’ve been with my husband for fourteen years. Of course he’s not the same person as when we first got together. And neither am I. Trying to see him with new eyes means I can accommodate things about him that might otherwise not seem to fit. Like his propensity to be a home body, where once he was very social. Or his need to know exactly when I’ll be home, where once we lived quite independently from each other. He’s a working Dad, who likes to ground himself at home and to have dinner on the table on time.

As a Mum of twins, Meshel found further inspiration from an unlikely source. Gwyneth Paltrow and Chris Martin’s public “conscious uncoupling” may have made you groan inwardly, but Meshel says that following what they did helped her and her husband form an amicable partnership that many parents aspire to once their relationship ends.

“I remembered her saying that she and Chris Martin would have breakfast with each other every Sunday with their kids whether they hated each other or not. And I started from that place… we tried to make one thing a week that we did with the kids where we could bite our tongues, not get into our drama, and really focus on them. And then from that one thing it grew. And we learnt to trust each other again.”

Another thing that I found helpful was the idea that we own our emotions, that is, it’s not our partner’s fault if we get annoyed about them leaving their towel on the floor. Or the dishes in the sink.

“My ex-husband used to put the cutlery in a coffee mug in the sink and fill it with water. And it just drove me insane for 19 years. We just had this same fight over and over again…. When you say to yourself, that’s not a big deal, I’m over-reacting to that… I refuse to react with anger at that situation anymore… wow just a simple thing like that just changes everything. Just because you’ve always reacted in a certain way to something, doesn’t mean you always have to”.

Though she is careful to point out that sometimes it’s totally legitimate to be angry at your partner. Meshel says you don’t need to let people treat you badly, but you can choose not to respond with anger. You can react in a more peaceful and powerful way.

These days, Meshel applies her Buddhist practice with her children, learning to be present, patient and compassionate. She manages a 5 minute meditation at 5 am before she starts her radio show and she’s working on a true crime podcast.

She’s also working on a new book, about using Buddhism to find balance in a world where everyone is busy, stressed and juggling several balls.

Which sounds, given all the balls she is currently juggling, like another very real approach to Buddhism. I look forward to reading it.

:: What to say when bad things happen to the people you love
:: Mindfulness tips for parents and kids with Amy Taylor-Kabbaz
:: We need to change how we look at mothers' bodies